Mr. Palomar decides that from now on he will act as if he were dead, to see how the world gets along without him. For some while he has realized that things between him and the world are no longer proceeding as they used to; before, they seemed to expect something of each other, he and the world; now he no longer recalls what there was to expect, good or bad, or why this expectation kept him in a perpetually agitated, anxious state.

So now Mr. Palomar should feel a sensation of relief, no longer having to wonder what the world has in store for him; and there should be relief also for the world, which no longer has to bother about him. But it is the very expectation of enjoying this calm that makes Mr. Palomar anxious. In other words, being dead is less easy than it might seem. First of all, you must not confuse being dead with not being, a condition that occupies the vast expanse of time before birth, apparently symmetrical with the other, equally vast expanse that follows death. In fact, before birth we are part of the infinite possibilities that may or may not be fulfilled; whereas, once dead, we cannot fulfill ourselves either in the past (to which we now belong entirely but on which we can no longer have any influence) or in the future (which, even if influenced by us, remains forbidden to us). Mr. Palomar’s case is really simpler, since his capacity for having an influence on anything or anybody has always been negligible: the world can very well do without him, and he can consider himself dead quite serenely, without even altering his habits. The problem is not the change in what he does but in what he is, or, more specifically, in what he is as far as the world is concerned. Before, by “world” he meant the world plus himself; now it is a question of himself plus the world minus him.

Does the world minus him mean an end to anxiety? A world in which things happen independently of his presence and his reactions, following a law of their own or a necessity or rationale that does not involve him? The wave strikes the cliff and hollows out the rock, another wave arrives, another, and still another; whether he is or is not, everything goes on happening. The relief in being dead should be this: having eliminated that patch of uneasiness that is our presence, the only thing that matters is the extension and succession of things under the sun, in their impassive serenity. All is calm or tends toward calm, even hurricanes, earthquakes, the eruption of volcanoes. But was this not the earlier world, when he was in it? When every storm bore within itself the peace of afterward, prepared the moment when all the waves would have struck the shore, and the wind would have spent its force? Perhaps being dead is passing into the ocean of the waves that remain waves forever, so it is futile to wait for the sea to become calm.

The gaze of the dead is always a bit deprecatory. Places, situations, occasions are more or less what one already knew, and recognizing them always affords a certain satisfaction; but at the same time many variations, large and small, become noticeable. In and of themselves they might be acceptable, too, if they corresponded to a logical, coherent process; but instead they prove arbitrary and irregular, and this is irksome, especially because one is always tempted to intervene and make the correction that seems necessary, and, being dead, one cannot do it. Hence an attitude of reluctance, almost of embarrassment, but at the same time of smugness, the attitude of one who knows that what counts is his own past experience and there is no point in attaching too much importance to all the rest. Then a dominant feeling is quick to arise and impose itself on every thought: it is the relief of knowing that all those problems are other people’s problems, their business. The dead should no longer give a damn about anything, because it is not up to them to think about it any more; and even if that may seem immoral, it is in this irresponsibility that the dead find their gaiety.

The more Mr. Palomar’s spiritual condition approaches the one here described, the more the idea of being dead seems natural to him. To be sure, he has not yet found the sublime detachment he thought was usual with the dead, or a reason that surpasses all explanation, or an emergence from his own confines as if he were emerging from a tunnel that opens out into other dimensions. At times he has the illusion of being freed at least from the impatience he has felt all his life at seeing others do everything wrong, and in thinking that in their place he would also do it wrong but would at least be aware of his errors. But he is not really free of this impatience, and he realizes that his intolerance of others’ mistakes and his own will be perpetuated along with those mistakes, which no death can erase. So he might as well get used to it: for Mr. Palomar being dead means resigning himself to remaining the same in a definitive state, which he can no longer hope to change.

Mr. Palomar does not underestimate the advantages that the condition of being alive can have over that of being dead: not as regards the future, where risks are always very great and benefits can be of short duration, but in the sense of the possibility of improving the form of one’s own past. (Unless one is already fully satisfied with one’s own past, a situation too uninteresting to make it worth investigating.) A person’s life consists of a collection of events, the last of which could also change the meaning of the whole, not because it counts more than the previous ones but because once they are included in a life, events are arranged in an order that is not chronological but, rather, corresponds to an inner architecture. A person, for example, reads in adulthood a book that is important for him, and it makes him say, “How could I have lived without having read it!,” and also, “What a pity I did not read it in my youth!” Well, these statements do not have much meaning, especially the second, because after he has read that book, his whole life becomes the life of a person who has read that book, and it is of little importance whether he read it early or late, because now his life before that reading also assumes a form shaped by that reading.

This is the most difficult step in learning how to be dead: to become convinced that your own life is a closed whole, all in the past, to which you can add nothing and can alter none of the relationships among the various elements. Of course, those who go on living can, according to their shifting experience, intoduce changes in the lives of the dead, too, giving form to what had none or what seemed to have a different form: recognizing, for example, a just rebel in someone who had been vituperated for his lawless actions, celebrating a poet or a prophet in one who had felt doomed to neurosis or delirium. But these are changes that matter mostly to the living. It is unlikely that they, the dead, will profit by them. Each individual is made up of what he has lived and the way he lived it, and no one can take this away from him. Anyone who has lived in suffering is always made of that suffering; if they try to take it away from him, he is no longer himself.

Therefore, Mr. Palomar prepares to become a grouchy dead man, reluctant to submit to the sentence to remaing exactly as he is; but he is unwilling to give up anything of himself, even if it is a burden.

Of course, it is also possible to rely on those devices that guarantee survival of at least a part of the self in posterity. These views can be divided into two broad categories: the biological mechanism, which allows leaving to descendants that part of the self known as the genetic heritage; and the historical mechanism, which grants a continuance in the memory and language of those who go on living and inherit that portion, large or small, of experience that even the most inept man gathers and stores up. These mechanisms can also be seen as a single one, considering the succession of generations like the stages in the life of a single person, which goes on for centuries and millennia; but this is simply a postponement of the problem, from one’s own, individual death to the extinction of the human race, however late this may occur. 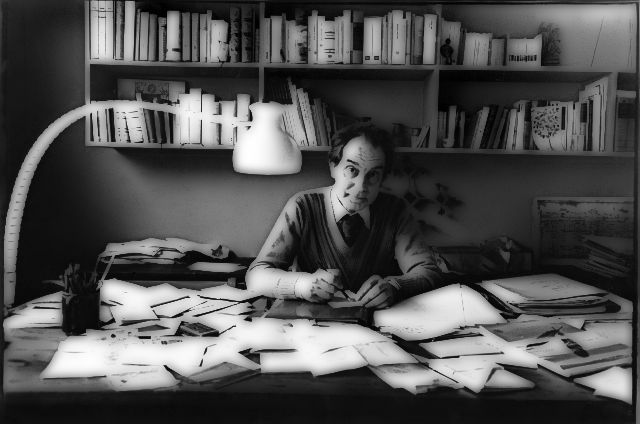 Thinking of his own death, Mr. Palomar already thinks of that of the last survivors of the human species or of its derivations or heirs: on the terrestrial globe, devastated and deserted, explorers from another planet land; they decipher the clues recorded in the hieroglyphics of the pyramids and in the punched cards of the electronic calculators; the memory of the human race is reborn from its ashes and is spread through the inhabited zones of the universe. And so, after one postponement or another, the moment comes when it is time to wear out and be extinguished in an empty sky, when the last material evidence of the memory of living will degenerate in a flash of heat, or will crystallize its atoms in the chill of an immobile order.

“If time has to end, it can be described, instant by instant,” Mr. Palomar thinks, “and each instant, when described, expands so that its end can no longer be seen.” He decides that he will set himself to describing every instant of his life, and until he has described them all he will no longer think of being dead. At that moment he dies.

[Interview] Bykürius: The chill wind that leads you into the void

A Translation of “Midland in Stilfs,” a 1971 Short Story by Thomas Bernhard

Clifford Harper: What is Government?

FC Nantes, a flash in the night of French football