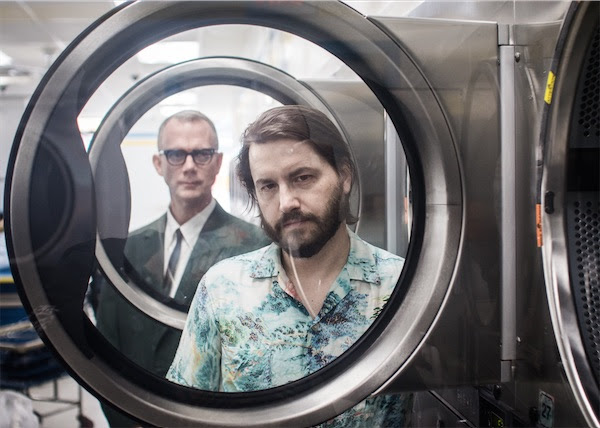 Driven by their abiding belief in the musical potential of sound, Matmos (Drew Danieland M.C. Schmidt) have always created a wide range of imaginative recordings and inventive live performances since their formation 20 years ago. In addition to releasing a string of highly acclaimed electronic albums, such as their debut Thrill Jockey Records full-length ‘The Marriage of True Minds’ in 2013, they have played the uterus and reproductive tract of a cow at the San Francisco Art Institute, Daniel used Schmidt’s bare buttocks as an percussion instrument at London’s Queen Elizabeth Hall for Antony Hegarty’s curated Meltdown Festival, canisters of helium at Radio City Music Hall while opening for Bjork, and John Cage’s personal collection of conch shells at Carnegie Hall.

Their forthcoming new album Ultimate Care II, out 19th February, perfectly reveals their artistry; they made it entirely out of the sounds generated by a Whirlpool Ultimate Care II model washing machine in the basement of their home in Baltimore. Harvesting the machine’s rich vocabulary of rhythmic chugs, spin cycle drones, rinse cycle splashes, metallic clanks and electronic beeps, Matmos have crafted a work of sly humour in which one of the quintessential sounds of everyday domestic life is transformed into an unlikely source for a surprisingly listenable suite of music.

Ultimate Care II is an encounter with the unrealised possibilities of domesticity. Like its namesake, the album runs across its variations as one continuous thirty-eight minute experience that starts with the grinding turn of the wash size selection wheel, and ends with the alert noise that signals that the wash is done.

Between these audio-verité bookends, the listener experiences an exploded view of the machine, hearing it in normal operation, but also as an object being rubbed and stroked and drummed upon and prodded and sampled and sequenced and processed by the duo, with some occasional extra help from local musical guest stars (some of whom regularly do laundry at Matmos’ home). Dan Deacon, Max Eilbacher (Horse Lords),Sam Haberman (Horse Lords), Jason Willett (Half Japanese), and Duncan Moore(Needle Gun) all took part, either playing the machine like a drum, processing its audio, or sending MIDI data to the duo’s samplers. The result is a suite of rhythmic, melodic and drone-based compositions that morph dramatically, but remain fanatically centered upon their single, original sound source.

In a visual analogue to the recording process, the artwork for the album is constructed entirely out of photographs of the machine in question, shot in its natural habitat and then digitally manipulated by New York artist Ted Mineo. Lending trunk-rattling low end and sharp high frequencies, Rashad Becker mastered the album at D&M in Berlin.

A work of intricate sampling techniques and labour-intensive post-production might seem impossible to perform live. Furthermore, as a rule of thumb, water and electricity don’t mix. Yet in 2016, Matmos will stage the work in Europe. As a concert experience that celebrates homely domestic materials with high-tech processing, Ultimate Care II promises to be the ultimate expression of Matmos’ dedication to the audio-visual potential of objects.