The peak of praxis: A small conversation about Institute Benjamenta

On the screen we see the hilarious fonts of the movie and the eyes of a monkey. We can mention the perpetrators as a woman and a man and hear barely what they talk about.

The room is dark. We see two heads in the darkness. They look vibrating, sometimes shaking smoothly in front of the screen. On the screen we see the hilarious fonts of the movie and the eyes of a monkey. We can mention the perpetrators as a woman and a man and hear barely what they talk about. 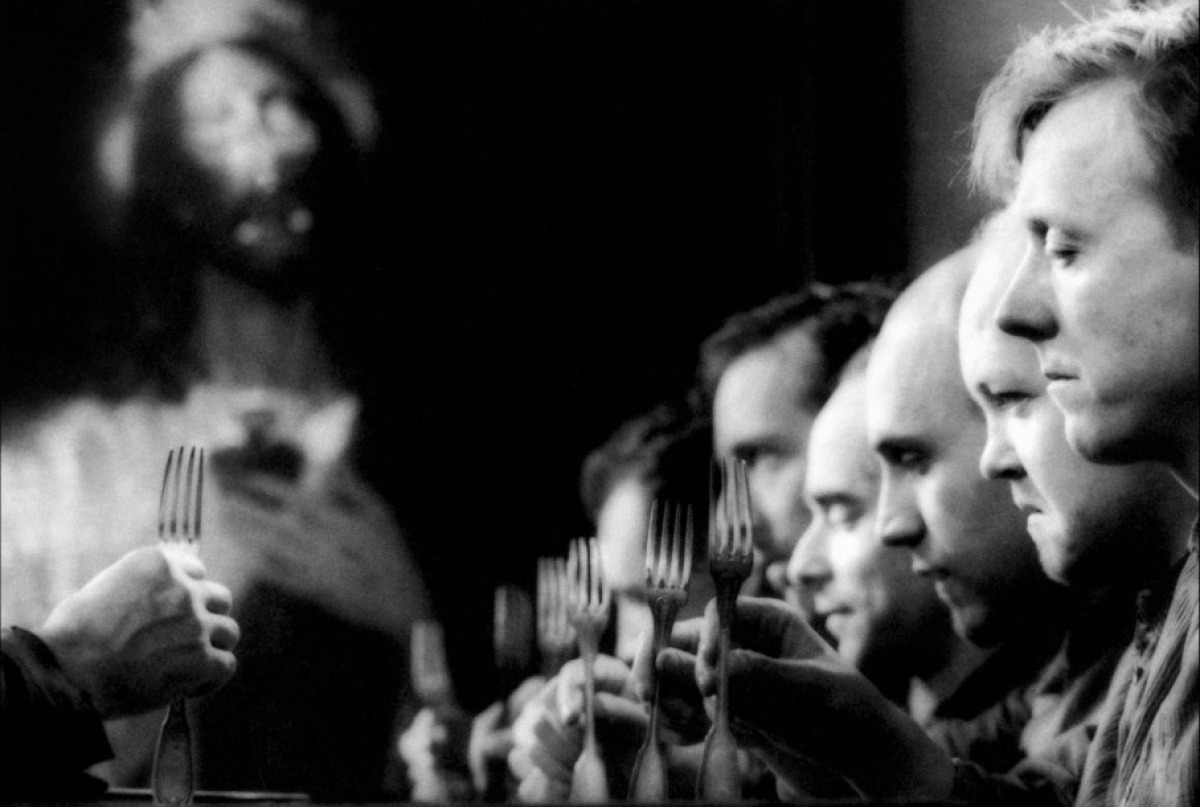 man: I have read that Bros Quay wanted music composition first, and then they finished the film. While Jakob has no ambition in this life, this seemed contrary ambitious behavior to me. In fact, making a film is an extraordinary ambition or writing a book about a character who doesn’t have any ambition in life. Watching this or any film needs desire to watch somehow, why we are watching this film, now?

woman: when Jakob knocked the door of the Institut Benjamenta, we do not hear any sound. Even his appearing does not make any noise. Jakob would like to become an “utterly round zero”. Something insignificant. It seems to me a height of ambition, the one which consist of overthrow the understanding, toward where the Bros Quay pushed the Institute Benjamenta, toward the uncanny. It makes me think about the word that Bilge Karasu invented in Gece « hiçölüm », translated in french by Alain Mascarou with a word borrowed from J.P. Sartre « néantisation ». It refers to the process of welcoming the nothingness in us, as a possibility to open new spaces for creation.

man: maybe Jakob gained his target as ambition after he was introduced with class mates. While progressing in being a part of the class and discovering the school, we see him having difficulty in opening the doors, dimension is twisting, angles are getting tiny on the corners, the rooms of the school are squirming, but they are stable in the classroom, Jakob is so himself in the lesson.

man: they vibrate, like pendulum, as their dance reminds me time, we do not know for which age and to which class these servants have been taught. Pendulum reminds me Poe, he was using it as a weapon, a threat for the main in jail and it is an important tool in esoteric rituals to concentrate and catch the spiritual moment. In the beginning and during the film, we see other occult symbols also, deer stag like horned god in pagan beliefs or flowing water to feed the soul. Yes uncanny but they create a visual ritual, a flow of images, they do not seem aiming nothingness but trying to create multi-dimension, showing shaking, and vibrating mind of someone. I am thirsty, can you hand the water? I was saying, the classroom, the classroom looks like a place of their homeland in the universe, they are being themselves there, they are not lost anymore. The classroom is their universe; the rest of the school is not real maybe, maybe, maybe.

woman: maybe. Maybe the school is only a psychic surface. Maybe only a philosophical allegory. The school is in nowhere, in no time, yes, we can see very few scenes of exterior, we are following the character wandering in a undetermined space, we are never able to know where the space begins and ends, what are the borders, which shape does the school really have, every spaces look fragmented, as the accumulation of numerous little scenettes which organize the film. Just of course as Robert Walser that wrote in short fragments. That disappearance of concrete points of reference creates a claustrophobia feeling, do you feel it. The play on light, on reflection, glows, shimmers, shadows, I remember that at one point we can see the light outside so strong, but the inside is still dark. This is an impossible image, darkness while the sun is at zenith.

man: yes claustrophobic feeling has been weighted on us, on the other hand, I would like to underline a totally unnecessary detail about the link between the choreographs in the lesson and the Bros Quay’s craftship of puppets. The collectivity of the students during the lesson is tied with puppets and their existence on being zero. We have all masters and we are all masters of others in this life, we need to face with it. Even this film will be forgotten in the future, the dance scene will live forever. I have poured water on you, I am sorry. In fact, all film can be redone as a musical with choreography. All with dance with sound and all with dance without any sound or only with the sound of their bodies. Just like here. I have not read Jakob VG, does he dance in the book, does he move like a puppet in the book?

woman: he is not dancing in the book but we can feel this puppet behavior, animated by the devotion to the rule. Can you give me the napkin? The only moment that Jakob shows revolt is when he asks to Lisa, falling at her feet, a room for his own, a decent room to sleep. The discipline of the Institute creates robotic, automated behaviors and seems not to leave the possibility to side step, but aside from that there is the strong presence of phantasmagoric rooms. I felt that there are unknown, indefinable spaces, in a way empty of meaning but in the same time opened to its creation. You talked about the signs and symbols, they are here as builders of sense to something that does not directly have. You create your own wandering interpretation, just like Jakob tries to. To me these destabilized spaces; they are possibilities of mirages, of the settlement of irrational phantasms. Also, did you see their flee, in the book, as far as I remember they are fleeing in dream in the desert. We saw the flee in a white territory, as a counter-point of the claustrophobia of the Institute; this is also something that deals with the nothingness, starting from zero.

man: here is your napkin, do not forget to open it before using. In a luxury hotels and restaurants where people sit in their tables with clear knowledge of their behavior regarding the fact that they should behave in a certain way, they are aware that they can find cloth napkins in there, they sit there, napkins on their laps, waiting to be served. As the modern life dictates the rules of cost efficiency and easiness of recycling, we see paper napkins in our daily lives. In the film also, Jakob is being recycled but the building, not by being trapped inside the building but covered by the inner-system of education of the Institute and he accepts this with all his presence, he welcomes this trap as he thinks “maybe there is another meaning behind all these nothingness”, just like us sitting here, sitting in a restaurant table waiting with napkins in our laps while waiting to be served, maybe there is some meaning in this waiting, just like living and waiting for hiçölüm/ néantisation, because we here hope, there is some point of change in the future, in any case, in either way, we will see some exit of this nothingness to another one. I am hungry. Are you?

woman: yes, I am. I am waiting to be served. Do you see all these theatrical behaviors, how the film enlightens the codified manners that one must have in society, how good manners we see become simulacrum. The book plays especially with the absurdity of aristocratic conducts. The bodies of the boys of Benjamenta are together creating a collective choreography, whereas their voices, their words are almost absent, or alienated by a discourse that comes from outside. They are repeating again and again, all day long, the same gesture, bending their back, opening their arms, inclining their heads, swinging their bodies to one side and the other, one feet ahead another backwards…

They are rolling and unrolling the napkins, but soon the napkin becomes a threatening religious ritual. They look like marionettes in a world became abstract, unrelated, isolated. These gaps and décalage reveal what we accepted without seeing in it any absurdity, revealing the lack of our gaze. In the film, we see the rationality and codification of their bodies becoming the craziness. Did you see their face when they were dancing, screaming without a sound.

man: they were screaming the scream of nothingness. As we see a flow of scenes, a parade of images without an exact story, we look with our eyes open to that nothingness. Perhaps we have become servants while we sit here in the darkness and watch this nothingness flowing beyond the space, as Jakob explodes, overflows his space out of the Institute, we have moved on extreme manner with our motionless behavior while we watch, even without a blink.

The room is not dark anymore as the first light of the day falls on the window. The woman and the man sit still there without a move. ✪

Genesis P-Orridge: Broken into pieces in order to be one body

Kletka Red: Hijacking, Hybrid and art of losing it