Childhood — a continuous wave of revolution, systematically crushed by those reactionaries, the “grown ups.”
A tireless revolution and never disappointed, because it has no inkling of the defeat in store for it. The rear guard does not see the trap into which the vanguard gradually falls. Brave, trusting, the march has gone on ever since the world began: the drying up of faith and evaporation of illusions happen by dispersion, like a river “drunk” by the sand.

The aroma of the golden fruit — the same fruit that was guarded by the Hesperides in the magical garden that bloomed on the borders of the West, and thus some Mediterranean peoples still continue to designate the orange with the name of Portugal — conjured up visions of gardens lining the shores of tranquil gulfs, where the disk of the sea, similar to the eye of a goddess, shines in the light of noon.
Today I am no longer able to dissociate the smell of oranges from horrendous visions of open graves, steaming charnelhouses, rotting corpses. But that prudent nature, taking pity on us and on the tragic destiny of our lives, should use aromas to hide the acrid stench emanating from its pores — this is a truth that at that time I did not even suspect.

Of the darkest moments of my illness I recall almost nothing. I remember vaguely that every so often someone lifted me up out of bed. I journeyed endlessly down long bare corridors, across vast deserted rooms. Our immense shadows accompanied us on the wall. In the stride of whoever was carrying me in his arms, I seemed to be walking with the flabby legs of a giant.
All of a sudden I was blinded by a great light, and my breath was cut short in my throat: they had plunged me into icy water that I hadn’t seen coming. All around there is nothing but darkness and oblivion.
The nights were rent by horrendous cries, by prolonged singing that streaked across the settled darkness, the endless waiting.
Tumultuously these voices coursed through the night: the yelping of starving dogs, the howling of women in labor.
They told me later that these voices of suffering and death came from a kind of melodious brothel, situated across the street from our house. It was a fetid hovel that sported an illustrious name: the “Panathenaea.”
————

Excerpts from Tragedy of Childhood by Alberto Savinio. John Shepley’s translation was published in 1991 by The Marlboro Press. This book was apparently mostly written in 1919 though it was first published in 1937. 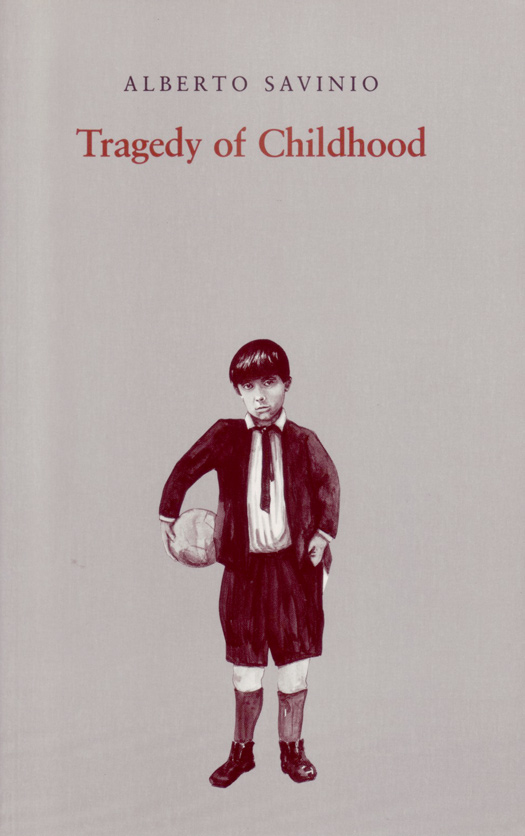 Italian polymath Alberto Savinio (1891-1952) left a large body of work in painting, music and literature. Brother of the better known Giorgio De Chirico, he shared with him the early phases of life: childhood in Greece, studies in Germany and participation in the Paris avantgarde circles.

The whole of the modern myth still in process of formation is founded on two bodies of work—Alberto Savinio’s and his brother Giorgio de Chirico’s—that are almost indistinguishable in spirit and that reached their zenith on the eve of the war of 1914. (André Breton, Anthology of Black Humour, 1937.)

I was surprised and beguiled; Savinio mistreated his instrument so much that after each piece the keyboard had to be cleared of chips and splinters. I foresee that within two years he will have gutted every piano in Paris. Savinio will then go on to destroy every piano in the universe, which may be a true liberation. (Guillaume Apollinaire in Mercure de France, June 1, 1914)

Someone should write the history of instrument smashing: Savinio, the Fluxus Jokers, Hendrix, Townshend, Annea Lockwood, etc. Sounds like this guy is the daddy of them all.

Clifford Harper: What is Government?

FC Nantes, a flash in the night of French football